I’m an India addict and this is my 12th visit… 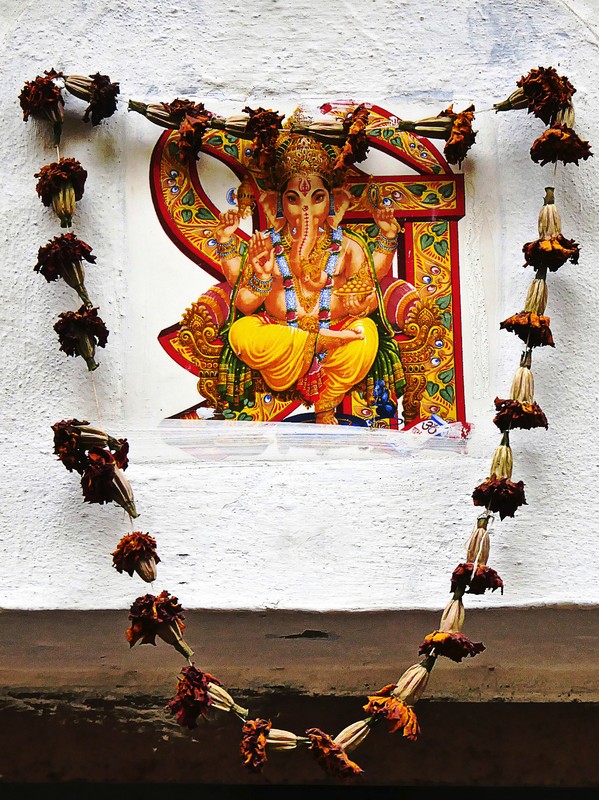 I confess - I’m addicted to this country's culture, its myths and legends, its religions, architecture, wildlife, food and, perhaps above all, its people. They're all in my blood and I'm desperate for what's become my annual fix!

Now, I'm only a few short weeks away from satisfying that craving.

Since my first visit to this vast, unbelievably chaotic, wonderful land in 1972, I’ve visited 11 of its 29 States and one of its seven Union Territories. I’ve passed through several others, but simply passing through doesn’t count, does it? So, here I go again, adding one new State and a lot of new places, faces and discoveries. I’ll also include a few familiar ones by way of rehab.

This time, I’m looking forward to having my elder brother David with me to share a whole month's adventures and an occasional bhang lassi (Google it!). David proudly admits to being ‘the rear end of the Grey Haired Nomads', whose journeys around the world are well documented on another, smaller and less reliable travel blog site (see here, if you must). His ‘front end’, Janice, has opted for the chill of their home county of Suffolk, the warmth of her friends and family, and her duties as Ladies’ Captain of their nearby golf club. Both ends visited India with me in 2013 (Three bloggers go to Bhārata for five weeks!), became mildly addicted, and returned without me in February 2017.

Together, David and I – two able-bodied(ish) men in the autumn of their years – will be making a spiritual journey along part of India’s iconic River Ganges. We're even daring to ride a wooden boat on it for two days. We’re also hoping to see tigers in the wild for the very first time. We'll definitely be meeting many old friends and inevitably make more new ones too. And, we’ll add more wildlife discoveries in Rajasthan towards the end of our tour.

Here's where we'll be going this year (click the little thumbnails if you want to enlarge the pictures): 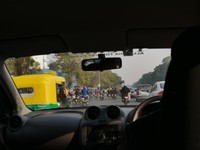 We’ve been here before, but plan to see and do a few things we missed, like the elitist Golf Club, the view from the minaret of one of India's largest mosques, and maybe we'll even enjoy lunch with the congregation of a Sikh temple. 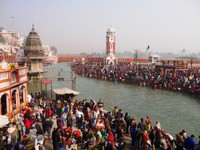 This is one of the most important pilgrimage places on the Ganges for Hindus.

Every twelve years, a Kumbh Mela, the world’s largest religious gathering, is held here. We’ll have missed that by eight years - fortunately perhaps as 10 million people bathed in the Ganges here in 2010 on one day alone! We will, however, be here for Makar Sankranti, an important solar festival, attended by only a few less millions, dedicated to Surya, the Hindu sun god. 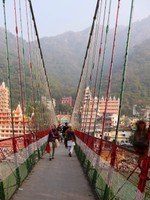 In this ‘Yoga Capital of the World’ on the banks of the Ganges, the Beatles attended a Transcendental Meditation course with Maharishi Mahesh Yogi and wrote many of their White Album songs.

We probably won’t transcendentally meditate and, while we may sing a few songs, we certainly won’t write any.

Instead, we'll see visitors who still dress like it's 1968, join one of the free yoga classes in our hotel (ageing limbs make this unlikely!), and we'll drive 70kms up river to Devprayag, where glacial waters from the rivers Bhagirathi and Alaknanda meet to become the birthplace of the sacred Ganges. 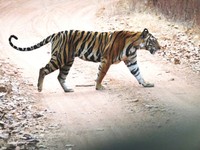 A day of long car journeys and two flights in small aircraft will bring us from the foothills of the Himalayas to the state of Madhya Pradesh in the country's central heartlands.

There we'll hunt (with cameras) for ever-elusive tigers in Bandhavgarh National Park under the guidance of an experienced hotelier and wildlife expert - and bemoan the lack of WiFi and telephone signals! 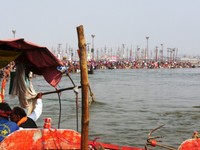 It's said that Hinduism is a religion into which you have to be born to properly understand it. Among other things, Hindus revere confluences and, in Allahabad, the Ganges meets the river Yamuna, the longest river in India which doesn't flow directly to the sea and which is almost as sacred as the Ganges itself. Allahabad has thus become the holiest of India’s pilgrimage centres and the most important of the Kumbh Mela locations (we've missed that one too - the next one here isn't until 2025).

We’ll be taking our first boat ride of the trip to the very spot where waters from the two rivers meet. Then, we plan a two-day, 180km ride in a small wooden boat, winding our way down the wide, slow-flowing Ganges. But this is India and not all plans run smoothly!
. 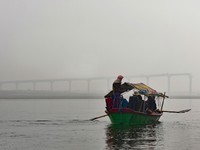 A convenient half-way stop on our journey towards the holy city of Varanasi.

Mirzapur's known for carpet making. It also has some remnants of British architecture from the days of the East India Company, apparently. 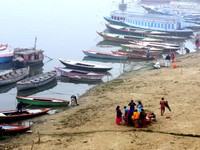 A full day’s boat ride will eventually bring us to our destination, the absolute holiest of Hinduism’s seven sacred cities. I think we’re both anxious about what we might experience, see and smell in this ancient, overcrowded city. Sewage flows uncontrolled into the river, bodies are cremated openly on its banks, and animals wander at will down its narrow alleyways. One blog I read recently said: 'I've never seen so much cowshit outside of a farm!' Can't wait...

During our stay here, we'll make a short journey north-east of the city to Sarnath, where Buddha came to give his first sermon after achieving enlightenment at Bodhgaya. 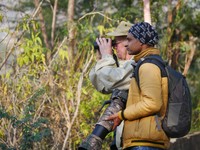 The capital of Rajasthan.

It's a city we've both visited before and home to many friends. We'll meet with some of them to take tea, to party, to go on photographic walks and to try spotting leopards in a reserve on the outskirts (a 'first' for David). 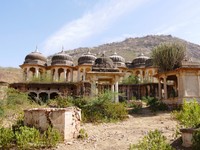 A town to the north of Jaipur visited only by those 'in the know'.

The family of some distinguished Jaipuri friends own a castle here, now converted into a hotel, and this is where we'll spend the night. We're hoping to have time for some bird-watching here too. 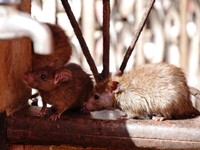 A day's ride from Khandela, via the Tal Chhapar sanctuary with its herds of Blackbuck antelope, will bring us to this city amid the sands and scrub of the Thar Desert.

I last came here on Republic Day 2016 (Rats, vultures and camels!) and have vivid memories of missing the parades but making visits to a temple with thousands of rats scurrying underfoot, an animal carcass dump and a camel research station. I'm looking forward to introducing David to all these wonders of incredible India. 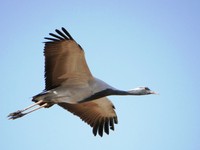 My blogs of previous visits to this amazing place (The eighth Wonder of the World perhaps? and The face of Success) made David so jealous that I simply have to show him its huge flocks of migratory Demoiselle Cranes at sunset and sunrise.

I'm just as excited to be returning!
. 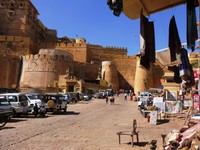 Another of those places that's in my blood, with a desert climate that my health thanks me for every time.

Its honey-coloured hilltop fort is unique and its proximity to the Desert National Park gives us an opportunity to spot critically-endangered Great Indian Bustards (which I did in 2017 - Once more into the Thar - and hope to do again this year!).

We'll also visit the brilliant Sunflower Learning Centre, which is supported by the hotel at which we'll be staying.
. 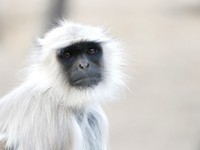 Jaipur, Rajasthan (2 nights)
A return visit to this chaotic city, travelling by air from Jaisalmer rather than by 12-hour overnight train. The airport at Jaisalmer was built in 2012 and mothballed until October 2017, by which time some of its equipment had deteriorated or been stolen! SpiceJet has resurrected the ghost airport and will carry us in one of its little Bombardier Dash 8 turboprops to Jaipur in under 90 minutes.

We'll spend our last day meeting friends, exploring the Pink City, bird-watching or taking another trip into the Jhalana forest.

That's it in a nutshell. It promises to be a very active month.

I hope to have time to inject life into a few blogs along the way!

Next Table of contents

I've been neglecting your excellent blogs (and those of several other friends) in my efforts to catch up with my own, but I hope to follow you along part at least of this route

Comments on this blog entry are now closed to non-Travellerspoint members. You can still leave a comment if you are a member of Travellerspoint.

If you aren't a member of Travellerspoint yet, you can join for free.