Too slowly down the Ganges

Pilgrims often arrive in the holy city of Varanasi on foot. Tourists usually arrive by air or by road. A few travellers arrive by boat. These two grey-haired brothers, determined to be travellers rather than tourists, were among those latter few!

In the late 1960s, one of the finest travel writers of all time, the late Eric Newby, wrote a book* describing how he and his wife Wanda set out by boat to cruise the entire length of the River Ganges. Travelling in a variety of unstable vessels, their journey was more treacherous and slower than they'd imagined, but it was absolutely fascinating nonetheless. One critic rightly observed that the book's pages contained 'all the exasperating charm, dusty enchantment and recurrent dottiness of India'.

Perhaps it was my reading of those same pages long ago which had sown the seed for what we were about to attempt, albeit on a much smaller scale. We planned an adventure on the Ganges for the next two days - by boat from Allahabad downstream to Mirzapur then, after a night stop, continuing on the wide, twisting river to Varanasi.

I recall that, on at least one occasion, Eric and Wanda were bitterly disappointed when they had difficulty finding a boat to carry them along a particular section of the river.

My brother David and I now know exactly how they felt!

The plans had been made many moons in advance. I'm usually very hands-on when it comes to organising travel things, but I had no contacts with boat suppliers in Allahabad and our homestay hosts there had been unable to find anything suitable either. After hours of on-line research I'd eventually located a company in Delhi that specialised in such things and they'd fixed everything for us with their local agent - the boat, the timings, meals, hotel for a halfway stop in Mirzapur, sightseeing, the lot...

Things got off to a bad start. I was woken by my mobile phone ringing before daylight on the morning of our planned departure from Allahabad. It was the agent, a man named Bablu, babbling on about how he'd arrived in the locality but couldn't find where we were staying. He wasn't due here for another two hours! As the saying goes: 'better early than never', I suppose!

Bablu must have found us and slept in his car for the next two hours as we didn't see him until after breakfast, when we bid farewell to our homestay hosts.

We headed eastwards to Sitamarh, where we'd planned to visit an important temple and then board our boat. Twenty minutes into the two-hour journey, Bablu plucked up the courage to sheepishly announce that there was a problem with the boat. It had broken down and might not be fixed for a few hours. He'd try to find out more when we arrived.

On reaching Sitamarh, he tried to persuade us to have lunch in the restaurant of a hotel next to the temple - right now! The place was completely empty. Of course it was - it was only ten o'clock! He was clearly playing for time. We opted to look around the temple while he went off to make some calls about our boat. 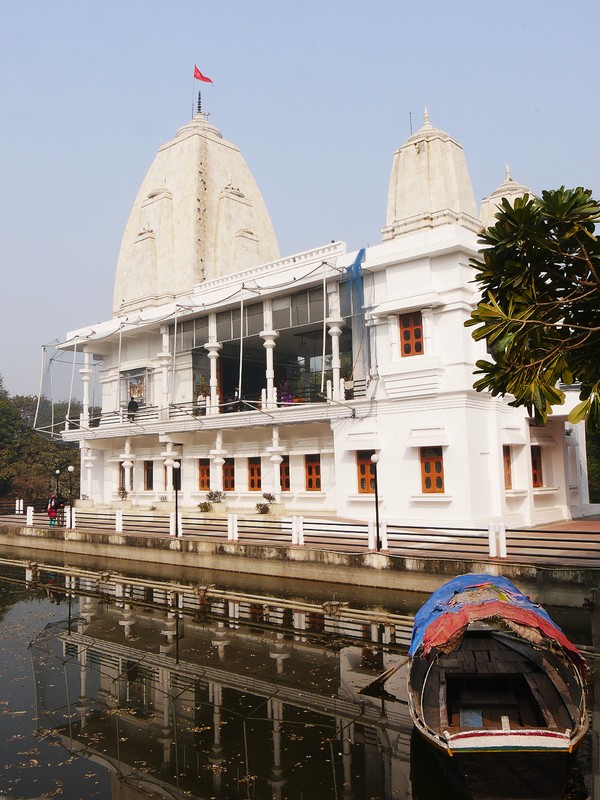 I have to say that the Sitamarhi Temple was definitely worth seeing and spectacularly different to any other we'd seen in our travels so far.

Its story was complicated in the extreme. Suffice to say that, according to the 'Ramayana' (an epic Sanskrit poem about the god Rama's quest to rescue his wife Sita from the clutches of an enemy, aided by an army of monkeys), Sita was abandoned, gave birth to twins and 'descended into the lap of Mother Earth' right here, at this very spot.

I don't understand the story either - I told you it was complicated!

However, this white marble temple was unusual in that it was almost surrounded by a large pond and reached by a bridge over the water. Within the complex was what looked like a water-slide with a blue man sitting at the top - it was a symbolic representation of god Shiva meditating in the Himalayas with the river Ganges emerging from the locks of his hair (if you need more explanation, read my blog A mistreated goddess). Under this, in a dimly-lit, cave-like place, was a lingam, a smooth black stone representation of Shiva (or some believe it to be a male/female fertility symbol). 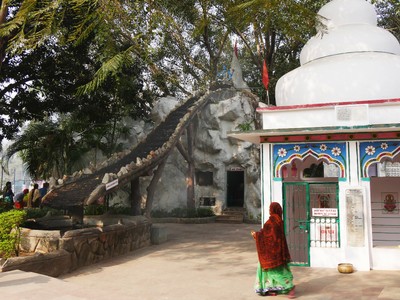 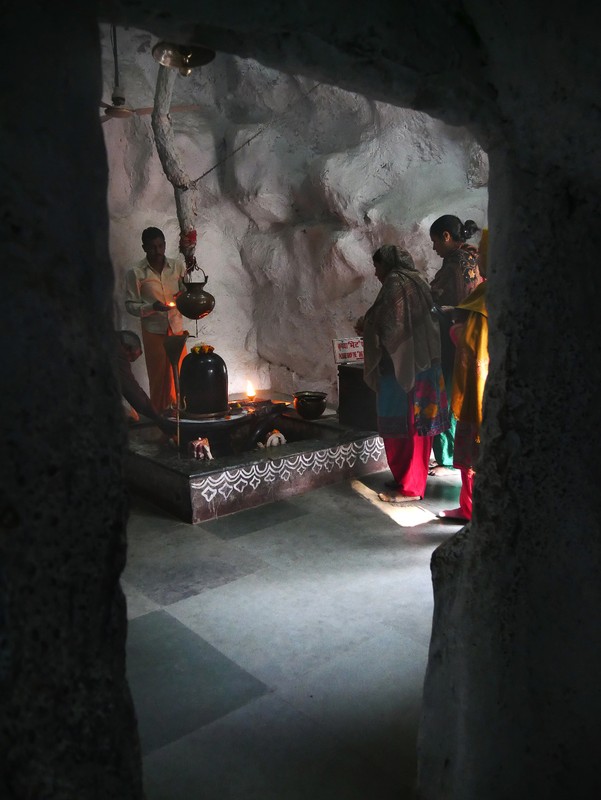 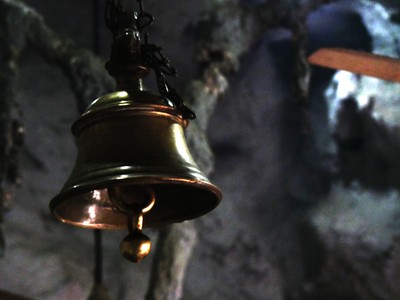 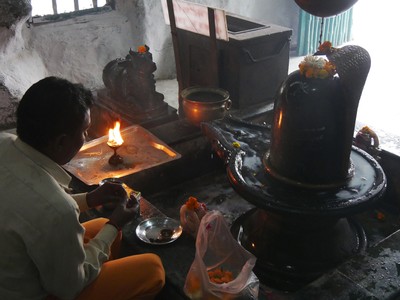 We crossed the bridge to enter the temple on the first floor and were immediately dazzled by an amazing scene of coloured and mirrored mosaics. 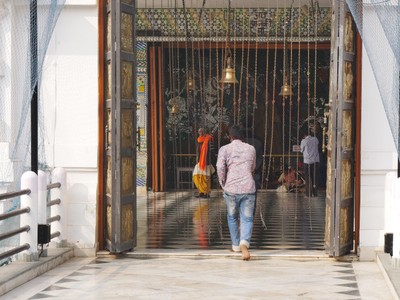 A marble statue of Sita dressed in a fine, yellow silk gown adorned with a huge garland of flowers stood in its midst beneath a shimmering silver dome. On three sides around her statue, the story of her journey 'into the lap of Mother Earth', together with pictures of Rama, her sons and various other figures, all trying to stop her from going underground, was fabulously depicted in shards of broken glass and bright, shiny pieces of mirror. 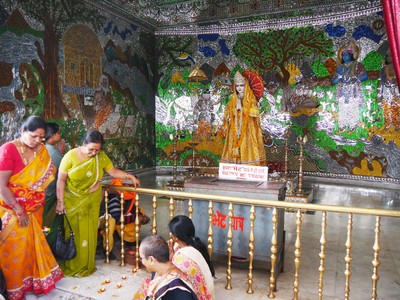 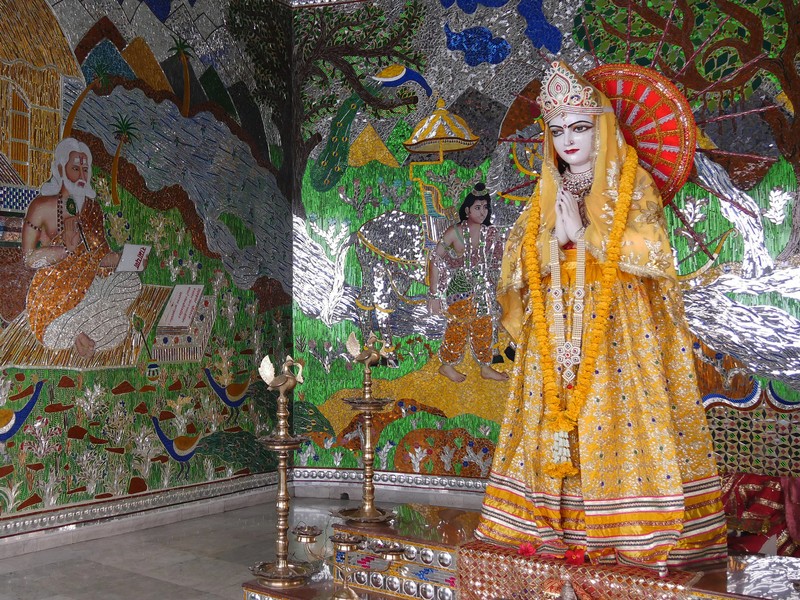 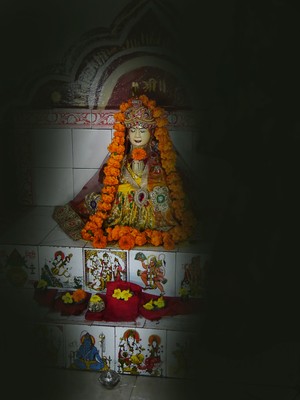 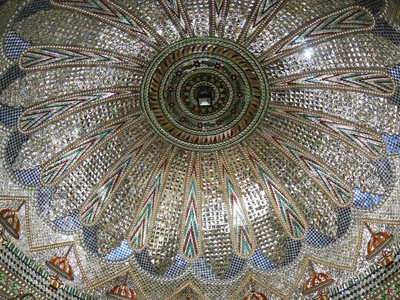 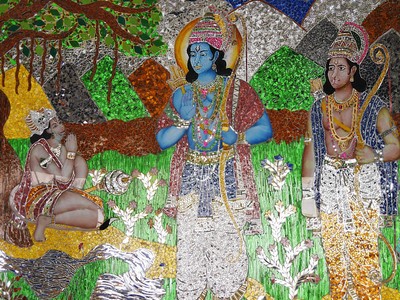 Down a flight of stairs was the exact place where Sita was said to have gone underground. Her tall, white image here was entirely different - sculpted, elegant, lifelike, perhaps wearing a little too much make-up but in a flowing robe with her long hair, as if caught by a breeze, flying out behind her. This too was clearly a much-revered place and women were leaving lamps filled with burning ghee, the belief being that if these flames remained lit for a certain length of time, all their wishes would be fulfilled.

Perhaps I should have lit one of those lamps myself - the news of our boat was no better when we left the temple. 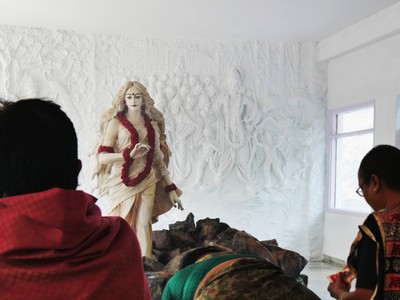 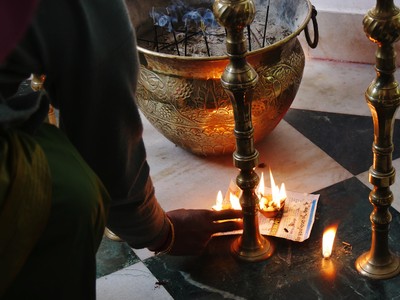 Bablu escorted us to the nearby Hanuman Temple, leaving us there while he walked down to the river to investigate if there were any alternative vessels available. He'd be back in an hour.

As Hanuman temples go, this was strange - it was really just a huge effigy of the monkey god, 108 feet (33 metres) tall. Interestingly, this was exactly the same height as the one we'd seen five years ago on Jakhoo Hill in Shimla (Off to join the Raj in their summer capital). The only place for worship seemed to be a small man-made cave underneath it. Judging by the metal stanchions erected around the statue though, a proper temple extension was due to be added soon. 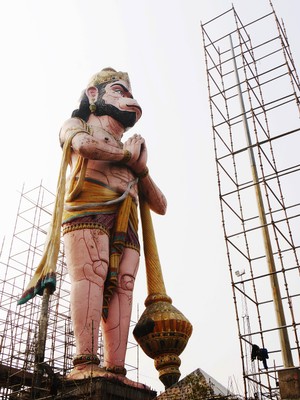 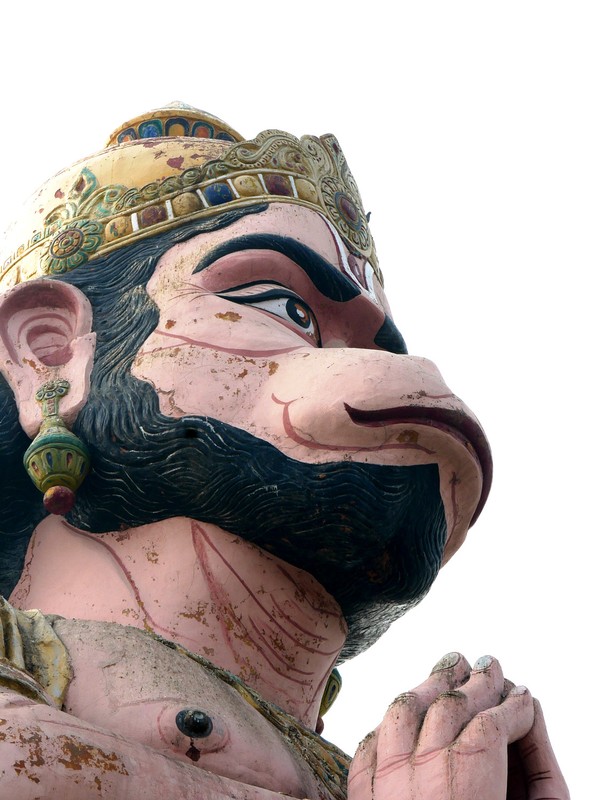 Bablu hadn't returned from his perambulations by the time we'd explored the statue, so we did a bit of perambulating of our own, into the adjoining market. Its colourful little stalls sold a variety of religious trinkets and offerings and there were a few simple places preparing food as lunchtime approached. We were thirsty more than hungry - an ice-cold beer would have gone down a treat. In this holy place, however, we had to make do with a couple of soft drinks from the only stall with a fridge. 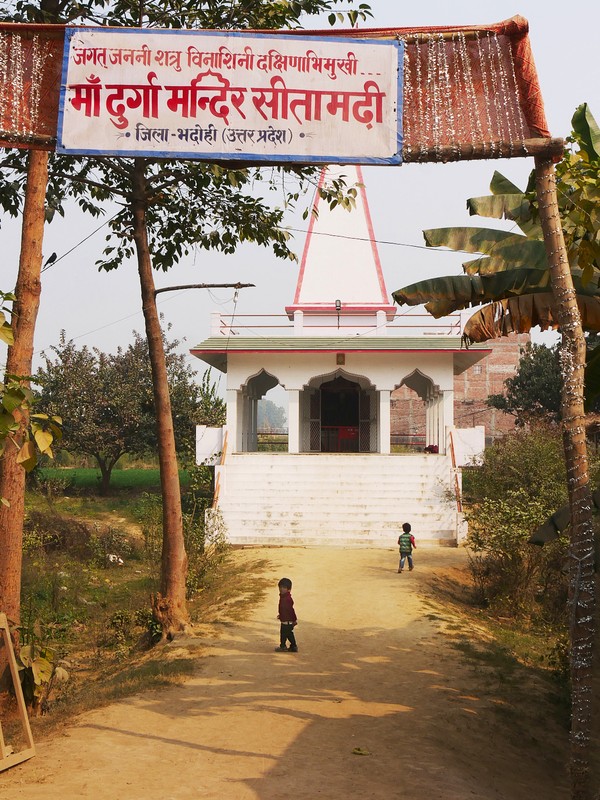 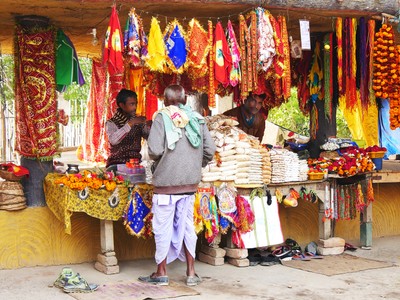 Eventually (an Indian 'hour' is roughly 90 minutes, sometimes longer!), Bablu returned. His message was a bit like the 'Which do you want first, the good news or the bad news?' joke.

The good news was that our boat had been fixed. Hooray...!

The bad news was that it was at Mirzapur, at least six or seven hours away on the water, maybe more. It would have to come up the winding river against the fast-flowing current. It would be dark by the time it arrived here. We'd be unable to get to Mirzapur until tomorrow, putting us a full day behind our carefully-planned and pre-booked schedule. Boo...!

The other bad news was that there were no other boats available here at Sitamarh to take us down to Mirzapur this afternoon. Boo... again!

We discussed abandoning the whole idea of the river adventure and going by road straight to Varanasi. Given our annoyance, this was a distinct possibility.

A compromise would be driving from here to Mirzapur instead of travelling by boat, and then spending just one day on the water from there to Varanasi.

David and I agreed it would be a shame to give up all of our much anticipated river adventure and decided on the compromise solution. I phoned the supplier in Delhi, vented our displeasure and agreed that a substantial reduction in price would be confirmed later.

So, Bablu took us in his car to Mirzapur, a road journey of less than 1½ hours.

It seemed like many similar towns in these parts - busy, dusty, narrow streets lined with shops. It wasn't the sort of place that attracts foreign tourists - you're unlikely to find many other travel blogs that include Mirzapur as a location!

David, never one to sit still for a minute longer than necessary, decided to take a walk before dinner and, by all accounts, had a very interesting stroll and lots of chats with shopkeepers. They weren't accustomed to meeting foreigners or even grey-haired men in general (grey-haired Indian men are few and far between - they usually dye their grey hair with henna, turning it orange!). I remained in the hotel to make more phone calls to my man in Delhi and to confirm our plans with my contact in Varanasi.

Tomorrow would be another day...!

Footnote to this strange day:
If I had a suspicious mind, I might begin to wonder whether our boat really did break down. It could, for example, have left Varanasi (where it was based, it transpired) too late to reach Sitamarh in time and only made it as far as Mirzapur before tragically 'breaking down'. But that would mean our almost wasted day was a Bablu charade. Surely not!

*The book was called 'Slowly down the Ganges', originally published by Hodder & Stoughton in 1966. It's terribly out-of-date, of course, but a lot of what Newby wrote is still eminently recognisable in the India of today!

Boat:
We definitely would NOT recommend anyone planning to emulate our river boat adventure to contact either the supplier we used (Ecowin Tours of Delhi) or their local agent Bablu. If you really wanted to do something like this, I suggest you email our contact in Varanasi (see my blog that's due to be published soon: 'The name may have changed, but little else had...'. ). His name is Raju Verma. I'm sure he can organise everything for you. With the benefit of hindsight, perhaps that's what I should have done!

Previous Next Table of contents

Comments on this blog entry are now closed to non-Travellerspoint members. You can still leave a comment if you are a member of Travellerspoint.

If you aren't a member of Travellerspoint yet, you can join for free.