The energy giver and healer

India's high caste Brahmins say a prayer three times a day, just before sunrise, at noon and just before sunset, in which they praise water as the energy giver and healer.

No water in India is praised more highly than that of the Ganges and our spiritual journey would have been incomplete without a visit to where this holiest of all holy rivers begins its life.

Perhaps that's why we chose to go to Rishikesh - not so much to discover what all The Beatles fuss was about ('Ob-La-Di, Ob-La-Da...'), nor even to experience another evening aarthi ceremony (even though that alone was worth going there for). Rather, it may have been because Rishikesh was only a couple of hours from where the sacred Ganges is born. 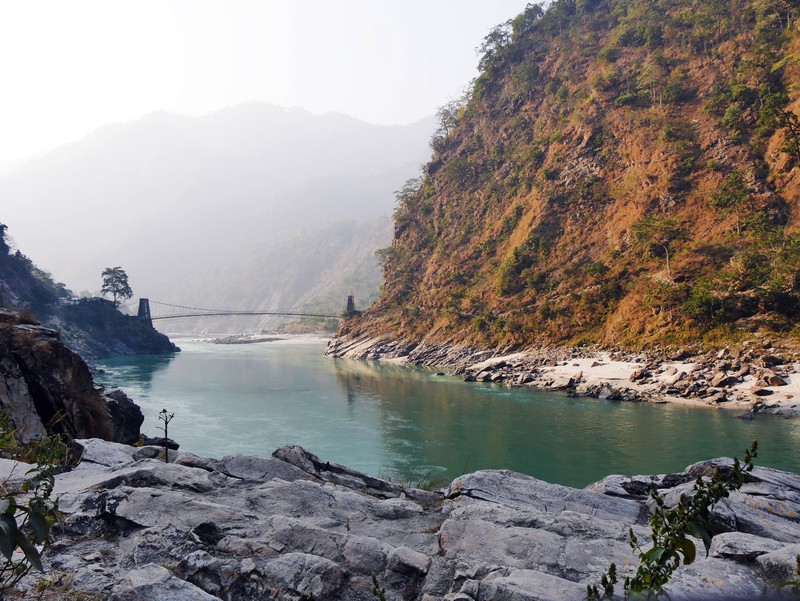 There's a popular misconception that the Ganges starts at the Gangotri Glacier, high up in the Himalayas. Well, it does - and it doesn't... The Gangotri actually provides the headwaters of the Bhagirathi (pronounced bag-ee-raaht-eee), one of two sacred tributaries of the Ganges that meet at a place called Devprayag (pronounced as it's spelt: dev-pray-ag). The other river is the Alaknanda (al-ak-nan-da), which flows from the Satopanth and Bhagirath Kharak glaciers near the Tibetan border. There's also another unseen, mythical one - more of which later.

It's at the prayag - the confluence - of these rivers in Devprayag ('Dev' means 'godly') that Ganga, the one we know as the Ganges, really begins.

On paper, Rishikesh is only about 70kms (42 miles) from Devprayag, or a little less from our hotel near the road out of the town to the north. At only 370 metres (1,220 feet) above sea level, however, Rishikesh is also over 560 metres (1,840 feet) lower, and there's mountainous terrain in between. We faced a taxi journey of more than two hours to reach our destination - but, wow, what a lovely journey it was.

Our scenic route followed the river flowing towards us far below in a deep ravine, the good single-carriageway road twisting and turning throughout the winding, uphill, downhill journey. All around were tree-covered hills, foothills of the mighty Himalayas, disappearing one after another into mist to the north, an ever-changing picture. There were very few places to stop in safety to take in the wonderful panoramic views but, whenever we could, David and I asked our driver to pull over and out came our cameras.

At these leisurely halts, we enjoyed sweeping vistas along the emerald-tinged waters sparkling in the late morning sun, down into the steep-sided ravines, and off into the hills and the hazy distance. 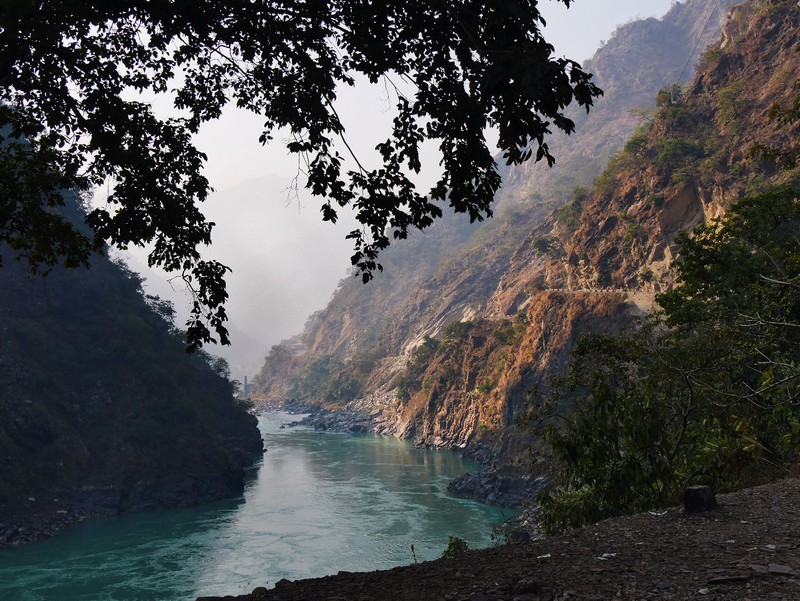 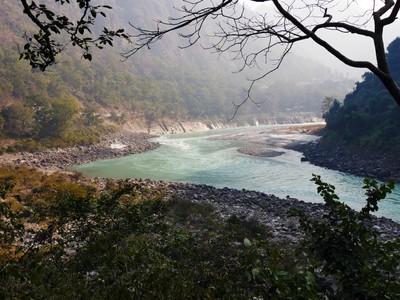 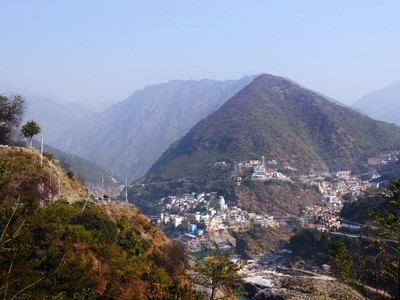 The last stop was made a few minutes from our destination, overlooking from on high the little town of Devprayag. Backed by rocky, green hills, the cluster of white, blue and yellow box-like houses with a temple tower reaching skywards sat on a triangle of land jutting out into what had now become the Ganges. The white water of the Bhagirathi thundered down on one side and the slower, darker, silt-laden flow of the Alaknanda joined it on the other.

Our driver took us on a little farther, eventually stopping at a sort of partly-covered terrace with a lay-by in front of it. His command of the English language wasn't terrific but we understood that he'd wait for us here, although he insisted we pay 100 Rupees (about £1.20) for parking - strange, I know, for it was just a lay-by, a pull-in place. I guessed he may have had to bribe a caretaker or a policeman or, perhaps, buy himself some lunch!

He pointed to where we had to go - to the other side of what we knew from our earlier viewpoint stop was raging white water. What he knew, but failed to tell us, was that, to reach that other side, we had to walk down hundreds of steps and then cross a bridge, none of which were visible from the terrace.

Through a stone archway, we jolted our knees down 20 or more extremely steep, deep steps. We reached a landing area at right angles to our path and could then see off to our left a long, flimsy-looking structure similar to, but narrower than, those at Rishikesh - a thin suspension footbridge painted in the familiar red, white and green of the Indian flag.

Avoiding sleeping dogs, cows and fresh brown reminders of their existence littering the path, we continued down a long flight of uneven steps. Ahead were two women in colourful outfits, each with a weighty-looking bag slung over one shoulder and an even weightier sack of something on their heads. They negotiated this precipitous stairway with ease. The only excuse I can offer for our own comparatively laboured descent is that we had bottles of water and cameras in the rucksacks on our backs - oh, and we were a few years older than them! 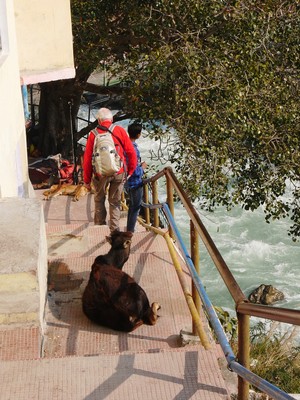 In the shade of a tree at the foot of the steps sat a bearded sadhu with his worldly goods in a red cloth bag. Next to him, on a pink plastic chair, a man wearing a heavily-padded jacket and a scarf tied elegantly around his head was reading a newspaper. In the background, the sound of a raging, bubbling torrent of white water was loud, not deafening, but loud enough to make conversation difficult. We braved the bridge. Fortunately, it was a calm day and, if the cow in front of us could do it, so could we. 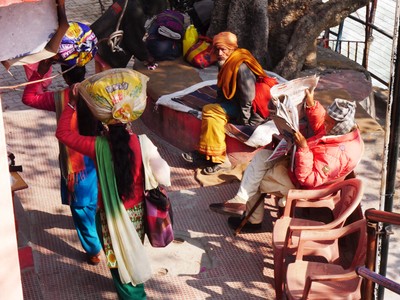 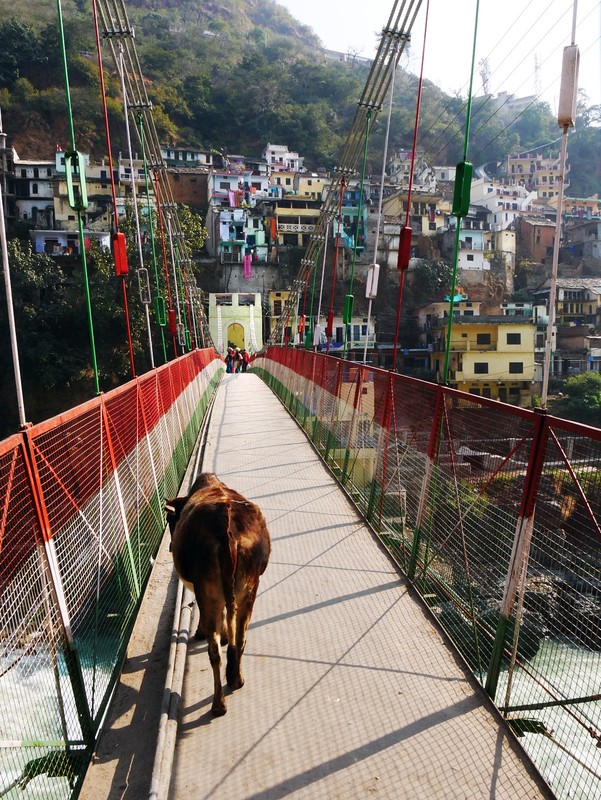 Beneath us, the Bhagirathi River flowed briskly through a high-sided, rocky valley. Downstream was a bathing ghat and what appeared to be the site of a recent open-air cremation (or maybe it was just building work in progress, who knows). The Bhagirathi, incidentally, was once an even more mighty river, today tamed by a hydro-power project upstream at the Tehri dam, but capable of producing the rushing waters tumbling beneath us nonetheless. 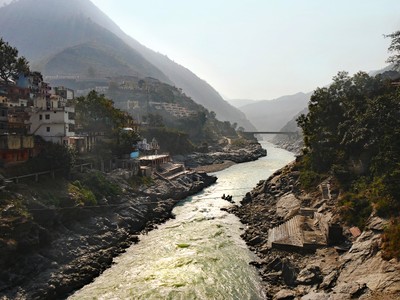 Ahead of us was the little town with a shaded, narrow street running parallel to the river and containing hole-in-the-wall shops catering to the needs of its 2,000 or so inhabitants and pilgrims alike. 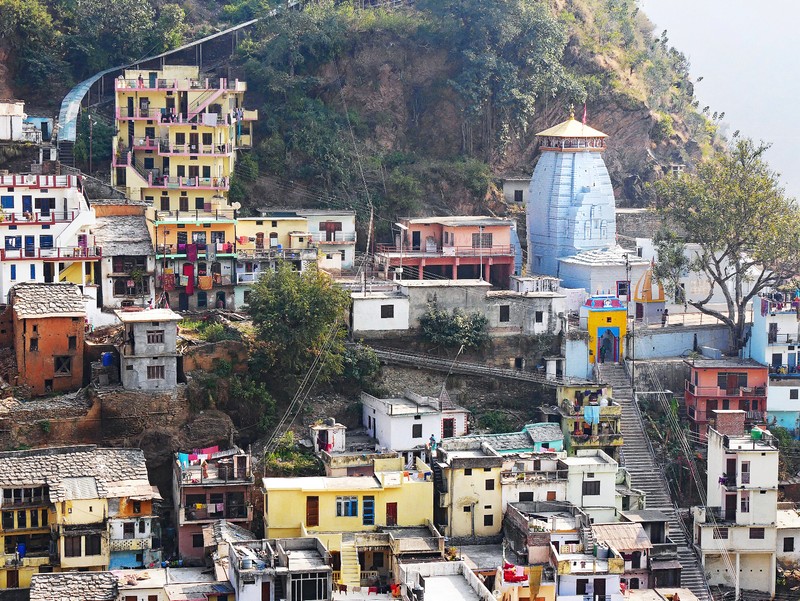 While sauntering past the shops, we couldn't resist investigating sounds of children speaking together in rhythmic tones. We'd discovered a lesson in progress at the grandly-named but tiny Omkarananda Public School and were beckoned in by the teacher. Thirty or so pupils, dressed in blue uniforms complete with dark-blue knock-off Nike woollen hats, proudly stood to attention to say 'hello'. They listened intently to our 'Good morning, how are you?', responding 'Fine, thank you' and then waving 'Goodbye' with big smiles when we left a few minutes later. 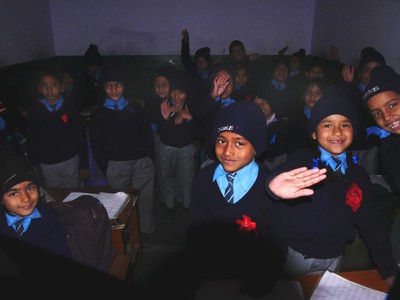 At the end of the lane, came more steps. These led down, past a blue and red shrine with what appeared to be images of the goddess Ganga, to the prayag we'd come all this way to see. 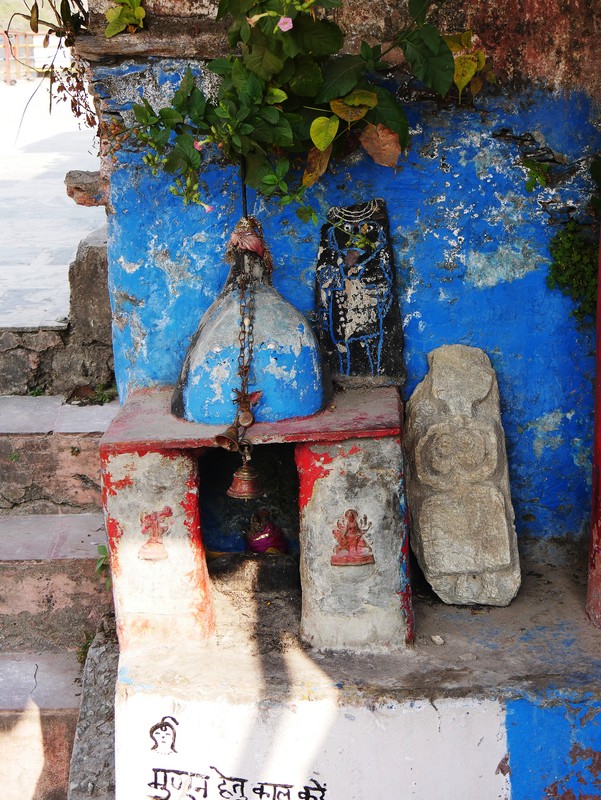 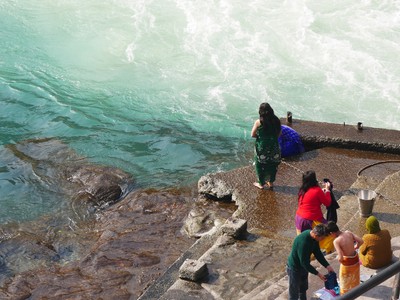 Part way down to the confluence point, I was approached by a man who said he was a local pujari, a priest. He offered to take me down to the prayag to say a puja, a prayer to cleanse all my sins in the holy Ganges. Apart from the fact that no amount of cleansing could even scratch the surface of sins committed in my extraordinarily long life, I knew from experience that such offers seldom ended well. The mumbo-jumbo of the puja almost always resulted in demands for exorbitant fees and consequent unpleasant disagreement. He ignored my repeated, polite 'no thank you', until I told him sternly that my religion would not permit me to say Hindu prayers in a language I couldn't understand. He folded his hands in pranam, respectfully putting his palms together, and smiled knowingly as I continued on my way.

At the foot of the steps, was a sadhu with a curly beard and hair to match. He said he lived in one of the caves behind him. Perhaps he did, even though there was no sign of any furniture or bedding in there and heaven help him anyway during times of ice-melt and monsoon rains as the whole area would be totally submerged. He was selling rolled pellets of dough, which I believe pilgrims bought to offer as prasad - food for deities, in this case in the form of carp-like fish called mahseer, which are known to inhabit these churning waters. 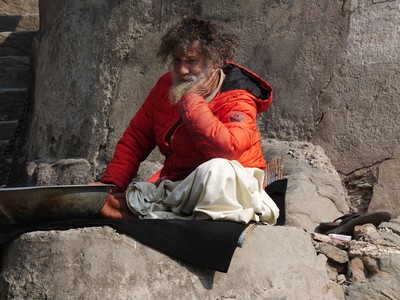 Here too was an army soldier from the Bengal Engineers stationed at Roorkee, a four-hour journey to the south-west. As a service to the temple, he was spending his leave using wood ash and some sand from the river to clean and polish a ritual kukri (a Nepalese-style of knife) and priests' metal instruments. I later saw him dousing his son with a bucket of icy water from the Ganges - another ritual similar to that being done by the husband to his wife in the accompanying photo. It seemed to be a lot safer than attempting to bathe in the rapidly-flowing water. 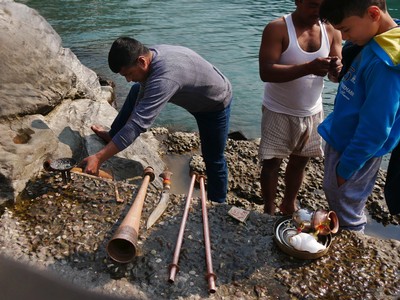 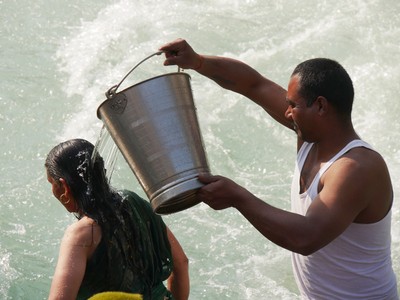 As you already know, 'prayag' means 'confluence' but there's a similar word 'prayaga' that means 'a place of sacrifice'. I'm told that people are sometimes seen floating down the river here trying hard to take their last breath - some may have just been accidentally swept away 'by the will of Mother Ganga' but some do it of their own free will. The mythical River Saraswati mentioned earlier (there's another story about this too - read on...) is said to flow underground, making the prayag a confluence of three rivers and thus even more important - so much so that some choose this place as their prayaga and head to the next world. 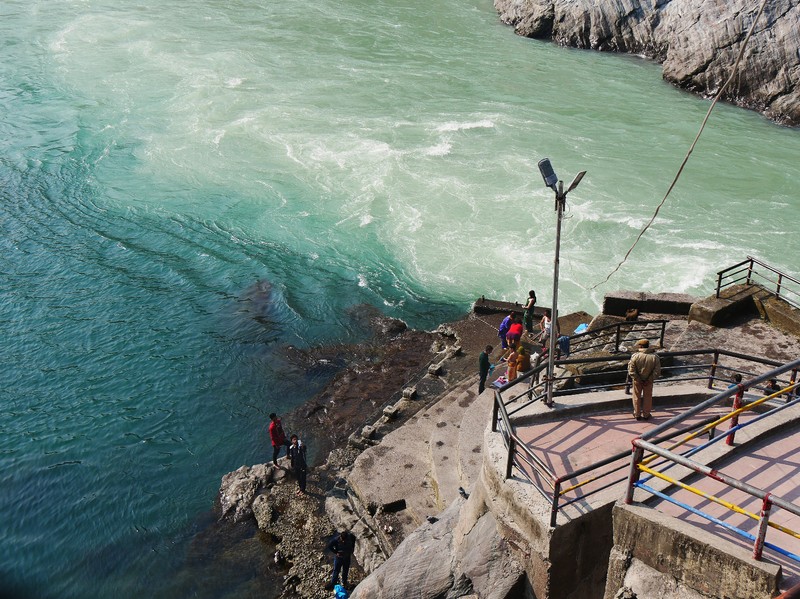 Back to the mythical Saraswati... In the depths of Hindu mythology, this is the third river at the start of the sacred Ganges. It's said to originate from a village near Badrinath higher up in the mountains and, at Devprayag, it stems from beneath the feet of one Raghunathji, whose much-worshipped image is to be found in his ancient eponymous temple here. Raghunath is also known as Rama, an avatar of Vishnu. (The 'ji' at the end of his name is a sign of respect - to some, for example, I'm Mikeji and my brother is Davidji.)

Raghunath is believed to have performed penance at this place after being cursed for killing the ten-headed, 20-armed demon king Ravana of Lanka (don't ask... I'll have to read the Hindu epic 'Ramayana' to find out more!). The temple with its tall, grey, oddly-shaped dome topped by a golden canopy is clearly visible in all views of the town and is reached by a near-vertical staircase of more than 100 steps. Fortunately, we'd heard that it was only open to visitors until 12.30pm and it was already after that as we passed by on our way back to the bridge and the hundreds of steps back up to our taxi! 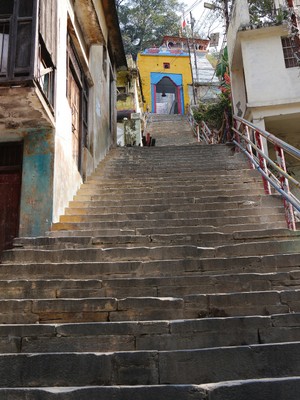 Our return to Rishikesh was by the same road, although travelling downhill it was a faster journey and the views as we descended were quite different. They were sometimes even more dramatic, towering hills all around dwarfing the mighty Ganges in the valleys beneath. 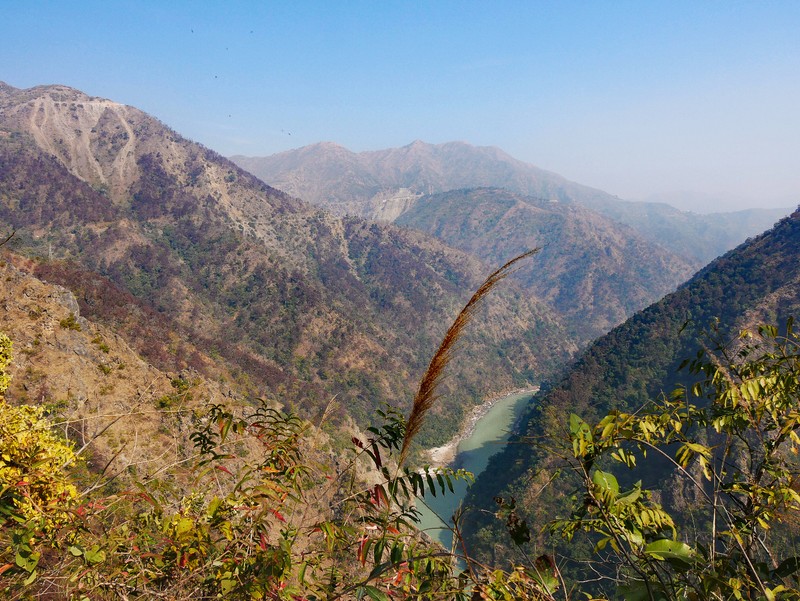 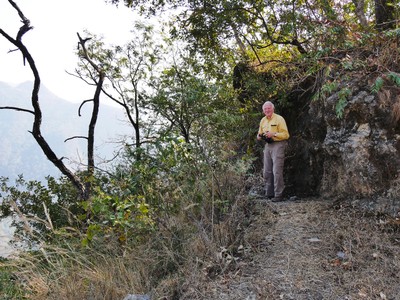 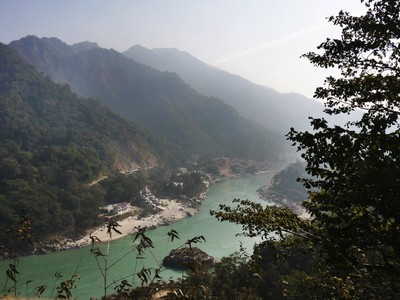 Today would not be our last encounter with this important, sacred river. We were only a week into our month's adventure and, while we would now take a few days out to search for tigers, our spiritual journey would soon continue on the Ganges farther downstream.